The 2020-21 NASTAR season was challenged by the COVID pandemic that shut down the 2019-20 season and cancelled the 2020 National Championships but adjustments were made to the event to provide a safe race experience. The new race format offered more opportunities to race, great racing conditions, dual head-to-head racing for prize money, camaraderie and fun!

The event kicked off with the NASTAR Slalom Championships which placed participants in their division based on their best result. Racers that earned a Platinum or Gold medal handicap in their age and gender group were placed in the Platinum/Gold Division and racers that earned a Silver or Bronze medal handicap in their group were place in the Silver/Bronze Division.

The National Championship races started with the Bronze Division competing Tuesday, April 6. In addition, cognitive adaptive racers competed with the bronze division racers and the participants that earned the most NASTAR Points earned a place in the Race of Champions-Finals on Wednesday. Racers that earned a silver medal handicap or higher were bumped up to the Silver Division and they were on the start list to compete in the silver division the next day.

Wednesday, April 7th saw the Silver Division compete for national titles and the top Bronze Division racers compete in the Race of Champions-Finals. In addition, NASTAR Pacesetter and U.S. Ski Team member Paula Motlzan was celebrating her birthday and national pacesetter Laurenne Ross was celebrating her retirement from the U.S. Ski Team. Setting the pace wearing tutus to celebrate, they had a blast racing and having fun with the competitors. The tutus certainly didn't slow them down as only 14 racers bumped up to the gold division. 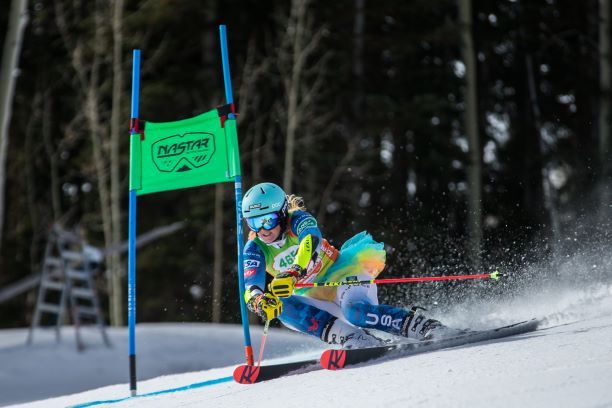 The race format for the nationals changed this year to accommodate COVID regulations, but the new format was well received and we plan to use the same format going forward. The goal was to spread people out by having ability divisions race on different days and to allow racers to take multiple runs rather than the standard two race runs. Most racers took five or six race runs but some took many more. Charles Young from Cary, NC set a record by taking 13 race runs. His best run placed him second in the Male 55-59 age group in the Silver Division, and he qualified for the Race of Champions (RoC) as the 28th seed. Charles had a great time racing in the finals and he made it to the round of eight before he was beaten by the eventual winner, Luke Tuddenham. Charles did not get faster during his 13th race run, but he sure had fun trying.

Theresa Clark  won the Female 55-59 Silver Division and qualified for Silver Division Finals as the number seven seed. She worked her way through the bracket to face Susie Whipps in the final. Susie won the 50-54 age group and was the number four seed. It was a close race but Theresa just beat Susie to the finish for the overall win and $300 in prize money. Susie earned $150 for second place. Theresa's family was busy racing too. Her kids raced on alpine skis and on telemark skis. Her daughter, Pearce Lembitz, won the gold medal in the girls 10-11 age group in the Gold Division on alpine skis and she earned a gold medal racing on telemark skis too. AJ Lembitz won the gold medal in the boys 10-11 Gold Division. AJ Telemark Lembitz raced in the Bronze Division on telemark skis and got bumped up to the Silver Division where he won another gold medal. Theresa's husband, Alan Lembitz, won the gold medal in the 60-64 telemark discipline in the Silver Division. In addition, they all raced in the slalom race and Theresa won another gold medal, Al won the telemark discipline and AJ and Pearce each won a silver medal in the Silver/Bronze Division in the slalom. And, Theresa is a ski patrol instructor. #nastarpowerfamily 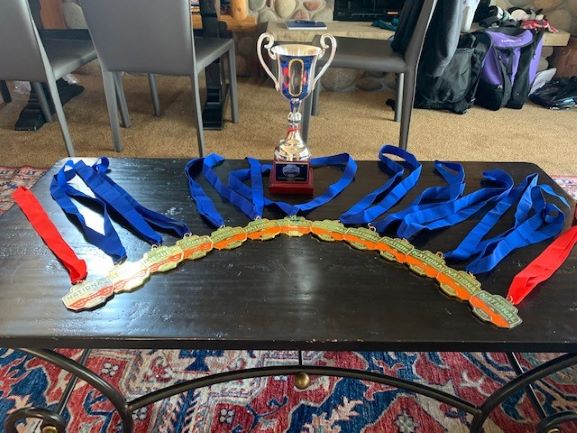 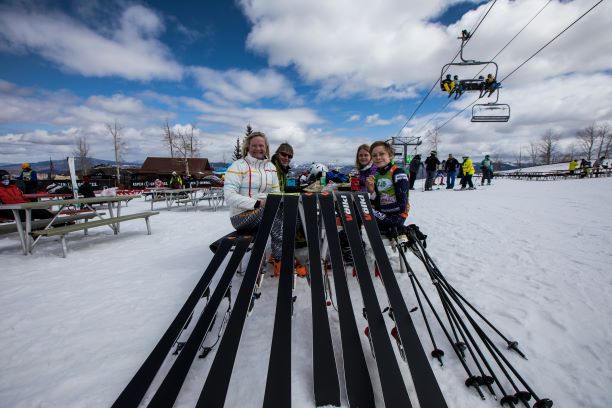 Gold Division racers Bumped up to the Platinum Division

JC BLACK is a NASTAR racer that never ceases to amaze. At 83 years young he won the Gold Division, Race of Champions-Finals by knocking off nine year-old local ripper, Lucas Roseberry. JC had his fastest time in the finals racing Lucas to take the win. Most racers will record their fastest time during their first race run when the course is in good condition and their legs are strong. When I ask JC what his secret is to good health, ambition and athleticism he said; "Keep moving. Keep moving your body and age is just a number."

The female bracket came down to a dual between sisters. Ten year-old Robina Josephine Walker narrowly edged our her twelve year-old sister Rosemary Walker to take the win but the family took home the lion's share of the gold division prize money. 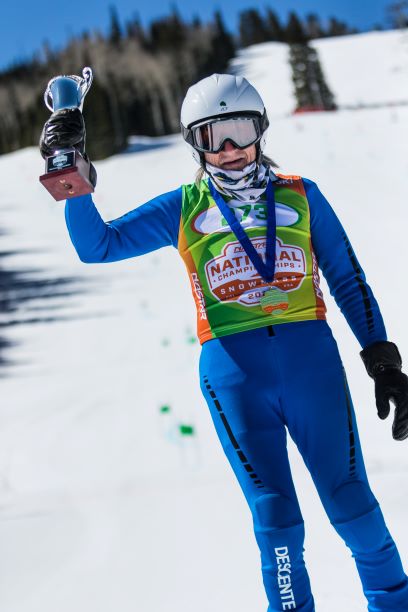 The Platinum Division Final was the last race for the National Championships and there were a wide variety of ages and disciplines that qualified for the final. The 32 male and 32 female racers that scored the most NASTAR Points made the single elimination bracket to compete for the win. Alpine skiers, snowboarders and Chris Marriott made the final racing on a snowbike.

The racing was intense as many of the racers experienced the pro-style start gates for the first time. Each racer brought their handicap into the final and the start gates opened depending upon their handicap. Many of the top seeds made mistakes trying to make up the differential against their competitor. The racers that skied fast and consistently moved their way through the bracket. Side by side racing is very distracting and when the pro-style start gates with start horns are added to the equation it can be intimidating. The start can be nerve wracking, especially when the start gates open at different times and a differential needs to be made up by the finish line. The format proved to be much more challenging than a standard NASTAR race.

Chris Berns is an adaptive racer from Lititz, PA. He races with a prosthesis below his right knee which makes it really difficult to maintain his edge on the hard snow. When the snow gets soft he says it is even more challenging to keep his ski going straight. However, he stayed focused and continued to pressure his competitors into making mistakes. It was impressive that the 61 year-old racer could keep it together through five runs of competition to take the win over much younger and faster competition. Alexadner Campian ran like a buzz saw through the top of the bracket to face Chris in the finals to earn second place and local speedster Patrick Hurley took the bronze medal a third place prize money. 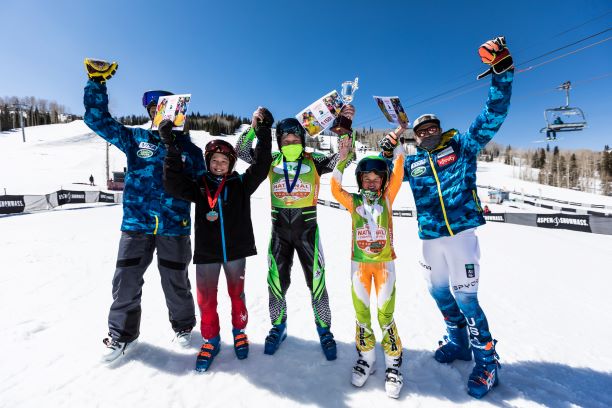 The finals for the females was equally intense. Former NASTAR National Champion, Dayna Larsen had the low handicap entering the race but she went down on her side, sliding out of the course in the first round against 14 year-old Sarah Gross. Sarah was matched against U.S. Ski and Snowboard's Director of Masters racing, Lauren Beckos in the next round and Lauren took the win. Lauren met Natlie Checkley in the round of eight but Natlie finished .42 hundredths of a second ahead of Lauren to make the quarter finals against Sienna Fuller. Fuller, the ten year-old Australian placed forth in the girls 10-11 but scored enough points to make the finals and she was skiing fast and looked to be on pace to win finals. Elise Carson politely worked her way through the bottom half of the bracket racing consistently and increasing her pace to meet Sienna in the final. The pairing proved to be close, but Elise was getting faster and after two days of competition and ten race runs she had her fastest run to take the win. 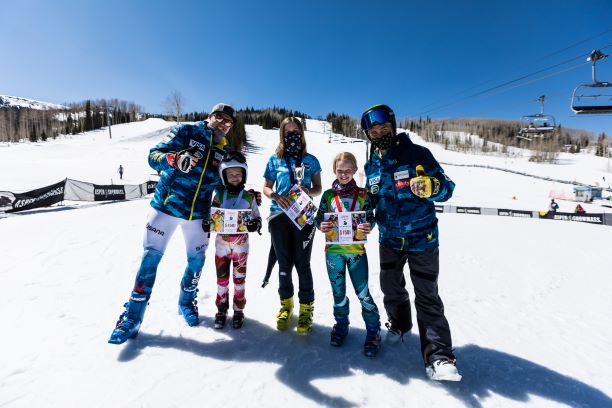 Thanks for a fun season, and book your calendars now for next years nationals, April 4 - 9, 2022 in Snowmass. 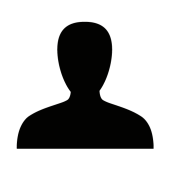