The History of NASTAR: Series 3

The Nastar idea needed an infusion of money to become a reality, and so SKI Magazine flew me to Chicago in the autumn of 1968 to meet with a potential sponsor, the now-defunct Schlitz brewery. I explained the concept to them. The Schlitz guys liked it.

“The program’s called Nastar,” I explained.

“No, no. It’s got to be named the Schlitz Open,” the ad agency guy shot back.

Returning home, I told my wife, who is German, that the meeting had gone well, but that we were stuck on the name.

“The Schlitz Open,” I replied. She shrieked with laughter.

“What are you laughing about?”

“Schlitz is our word for the fly on a man’s pants!”

The next day, I phoned the advertising agency in Chicago and told them the news. Within hours, I received a return call informing me that the Schlitz had agreed to the name Nastar.

“BEST IDEA SINCE THE ROPE TOW”

In December 1968, with Tom Corcoran’s indispensable help, the pacesetting trials took place at his new Waterville Valley resort in New Hampshire’s White Mountains. For the first time an idea that had existed on paper was entering physical reality.

In the winter months of 1969, Nastar’s first season, 2,500 recreational skiers competed at eight areas across the country -- from Mt. Snow in Vermont to Alpental in Washington, and at Vail, where the charismatic Swiss champion Roger Staub had become ski school director.

The standard for winning gold, silver and bronze pins was different for men and women. Two winters later, the standards for medal winning began to take age into account as well.

Response was upbeat. The New York Times ski columnist Mike Strauss called “Nastar the best thing to happen to skiing since the introduction of the rope tow.”

IMPORTANT ENOUGH TO CHEAT AT?

At the end of the first season, Schlitz flew 39 successful Nastar medalists to a final race at Heavenly Valley, California. They raced head-to-head, starting with times adjusted by their handicaps. The larger your numerical handicap, the better your head start. It didn’t occur to me that competitors might contrive to inflate their handicaps – the practice in golf, known as sandbagging. The Minneapolis Star’s ski columnist Ralph Thornton wrote a column suggesting the possibility that some racers had sandbagged, cheating Midwest skiers of victory.

Well, I thought, if it was worth cheating at, Nastar must be a success.

How to enhance Nastar’s popularity? One possibility was to incorporate the program into ski schools, as an objective way for instructors to measure the progress of students. I proposed the idea to the Professional Ski Instructors of America.

Many people, I argued, are able to ski proficiently, even elegantly, when they’re able to choose anywhere to make a turn. The instructor observes, applauds the student’s form, and advances him to a higher class. But what about making a must-do turn, at high speed, to avoid a tree? What about being forced to enter a gate at the right point in a race? It’s far more difficult to turn at a given spot. The skier must master skills like gliding, skidding, drifting, pivoting, rebounding, absorption and stepping, as well as carving, in order to get specifically from Point A to Point B. Instructors could use Nastar to monitor people’s advancing skill. The skier’s handicap would become the measure of his progress in taking lessons.

Deficient in powers of persuasion and lacking in political skill, I failed to convince anyone at PSIA, except notably Denver University coach Willy Schaeffler, that the organization, already famously resistant to innovation, should get behind Nastar.

My other hope was to interest the U.S. Ski Team. By linking the national handicap to the speed of the country’s fastest skiers, Nastar could serve as a grass roots system to identify young talent for future national teams.

MEETING IN THE STEAM ROOM

How to persuade the U.S. Ski Team to supply pacesetters? It wouldn’t be easy. Alpine director Bob Beattie preferred to exert control over programs involving the Team. I thought I might have a better chance of gaining Beattie’s support if I could enlist the persuasive former racer and Waterville Valley founder Tom Corcoran to talk to him.

One day, when I determined that both Corcoran and the itinerant Beattie would be in New York City, I arranged for us to meet at the New York Athletic Club on Central Park South. When Corcoran and I arrived in the club’s lobby, we learned that Beattie was in the steam room. We were told to meet him there.

Upstairs in the locker room, we stripped. Groping our way into the hot mist of the steam room, we found the perspiring coach. Inside the foggy chamber, Corcoran attempted to convince Beattie of the benefits of a union with Nastar. It would make the Ski Team visible on the slopes and in the magazine. By tying the times of the best U.S. racers to Nastar ratings, the Ski Team would enter into the daily awareness of recreational skiers. And a fraction of the recreational skier’s entry fee would be donated to the always sagging Ski Team treasury.

Emerging from the heat of the steam room, his face reddened to the color of a scalded beet’s interior, Beattie appeared to me to be unconvinced. What I didn’t know was that the coach himself was concocting in his mind his own five-year, multi-million dollar plan. Called the Buddy Werner League, it aimed -- like Little League baseball -- at tapping into 250,000 young athletes, through a program named after the late U.S. racing star.

Although the trip to the steam room had been a failure, Beattie’s view of Nastar changed a year later. Retired from the Ski Team, the former coach was seeking entrepreneurial opportunities. His search coincided with SKI Magazine’s (owner of the Nastar brand) search for a way to keep track of thousands of entries at a rapidly rising number of ski areas wanting to join in hosting the popular new races.

Off-site computers and software didn’t exist at the time. To pay for the labor-intensive organization, a way had to be found, not only to make the areas pay, but also to extract money from sponsors like Pepsi, Bonne Belle as well as Schlitz.

Under license from SKI, Beattie took over the operation of the program. He was the ideal guy to run it. In Nastar’s second season, the number of participating ski areas grew to thirty-nine. Sponsorships proliferated. Resorts took in money from guests willing to pay to race. Offshoot programs were created -- like Pepsi Junior Nastar and Hi-Star for interscholastic competition.

In conversations in lift lines and in base lodges, I heard the thrilled voices of intermediate skiers who’d raced for the first time in their lives. Excitedly they compared their handicap ratings. Friends, who’d never before skied competitively, told me of butterflies in their stomach as they stood in the Nastar starting gate. Children boasted about winning a bronze pin. At a Nastar finals, where recreational racers from 5 to 85 years of age competed, I saw a helmeted 10-year-old boy and his grandfather hugging one another as they rejoiced over their results. In their desire to learn from racing I was a believer. 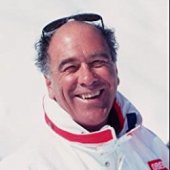