How the Heart of Our Sport Lies in Night Leagues

We’ve said it before and we’ll say it again, ski racing night leagues act as an active stanchion to the core of the sport. The long time league racers are the pillars of the sport and the staff behind the races keep passion present during the whitest and driest of winters all the same.

The Wachusett Night League at Wachusett Mountain, Massachusetts has been functioning for over 30 years now. Nearly 600 racers from all over New England join teams of six most often once a week for nine weeks out of the year and conclude their season with a Championship Race that takes place next weekend.

All races are scored using the NASTAR software and Radio Frequency I.D. (RFID) system that uses a software to track who a racer is by associating their season pass with a NASTAR ID number and in turn, links to athlete's team information too. It’s an incredible system that cheats the headache of having to deal with bibs, lines, antennas and further hassle that surrounds registering NASTAR athletes at the top of a course.

Gayle Joseph is the Head Time Keeper and Data Analyst at Wachusett Mountain for NASTAR. She feels compelled to continue introducing new athletes to the sport of NASTAR through ski racing while also facilitating the core of NASTAR itself with the weekly night leagues all winter.

“I like running races and I’ve been lucky enough to be asked to come out to NASTAR Nationals to help with data and head timekeeping,” said Joseph. “I love the community that NASTAR ends up providing for both families and for people who come to the mountain.”

The Wachusett Night League is made up of many dedicated faces, 70 of whom made it out to the Liberty Mutual NASTAR Nationals in Steamboat, Colorado last season and many will be at Nationals in Squaw this March.

Take Wachusett Mountain Ski Instructor and self proclaimed NASTAR timing shack worker bee, David Giammatteo. He’s been racing in the Wachusett Night League for 31 years and has actually had the same group of people on his team for the last six years.

“I come back to this league every year because of the people,” said Giammatteo. “Yes, of course there’s still adrenaline every time you step into a race course after all these years, but it’s the people who make it happen. After we are done racing at the end of the night and we’ve taken our two runs, we head up to the restaurant and bar, eat, drink and be merry while we wait for results to come out.”

Chayse Parker is 9 years old and on the Wachusett Ski Team and went to NASTAR Nationals last year. He’s planning on going again this year but has taken to his entrepreneurial spirits to raise money for travel by running coats from the top of the course to the bottom during the night leagues. Most often, the bags of clothes he carries are much bigger than he is. Joseph explained that this is what she likes to call a “why we do NASTAR” moment.

The President of Wachusett Mountain, Jeff Crowley, has been involved in the Night League races since the beginning of its time 34 years ago.

“It’s an absolutely wonderful group of guys and gals who come together every week to compete at our mountain and we’re so fortunate to have such a large pool of racers who come from the Boston area,” said Crowley.

Crowley explained that it’s so much more than a race. It’s the atmosphere that feeds into laugh-worthy camaraderie and casual trash talk exchange in email strings days before the races.

“I can remember way back in the day after our Championship race, a group of us were sitting around in the hottub over a few beers,” explained Crowley. “Somebody jokingly bet that we could ski 100 runs the next day at Wachusett and sure enough, the challenge took off at 8 a.m. the next morning. It’s the things like this that come out of the Night League that make it so much more than a race.” 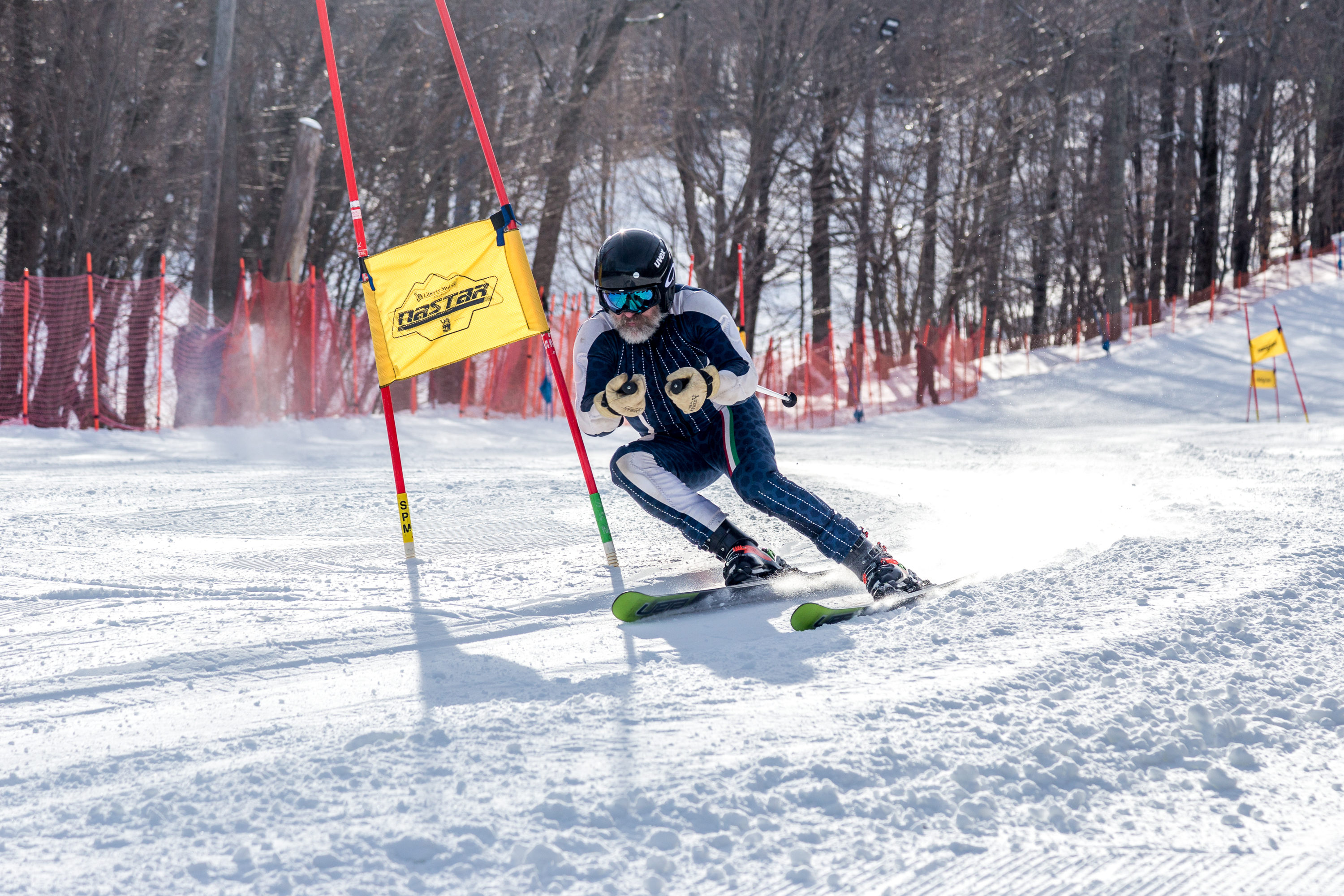 72 year old Clark Burrows has also been racing with the Wachusett Night League since the first year it began and is grateful for the NASTAR scoring system because the league doesn’t focus only on the younger racers who can hammer out super fast runs.

“I ski on Monday nights and that Monday after the end of the league season is the saddest night of the year,” said Burrows. “Even when there might still be good skiing outside of the course, my teammates and I look forward to this league all summer long.”

It’s these little night leagues that fuel the racing world, but in this case, the league isn’t so little.